Come discover Guitard’s “Puzzle Paintings” which exhibit a range of influences from early pre-Hispanic Mayan culture to postmodern geometric forms. The colors used are expressive of the movement that he creates mostly from memories of his own life experiences. His paintings can be found in private collections in Germany, Mexico, United States and Canada.

Jean Guitard was born in city of Verdun, Quebec in 1959. He is a self taught artist who started his trade with the guidance of Jean-Louis Deschambault. His early art career was influenced by Marc Aurele Fortin and Jean Paul Riopelle. He had his first showing at the age of 17 at Hotel Bonaventure in Montreal.

Throughout his career, he has experimented with a variety of styles but in recent years he has created his own which he calls “Puzzle Painting”, with a range of influences from early Pre-Hispanic Mayan culture to post-modern geometrical forms. 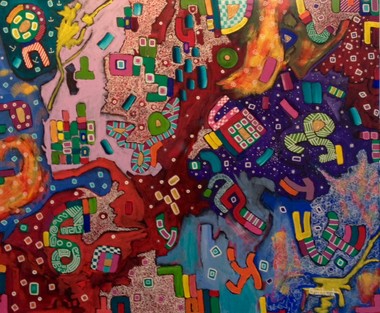 Find out about exhibitions, workshops, special events and more!